In a couple of weeks, both circus artists and circus fans in Chicago are going to be privvy to a different kind of festival–a circus festival that breaks down the 4th wall and invites participation and collaboration on many levels. A festival that values the process as much as the product and the people as much as the art form. Perhaps this focus on being part of the experience is why it’s called Moment. It didn’t come a moment too soon either, but just in the wake of the announcement that the Chicago Contemporary Circus Festival would not run for a second year due to funding issues. So, a small group of the circus artists decided to put together a more grass roots kind of event. Schools, shows, performers, multi-disciplinary artists, workshops and several circus institutions like Aloft and MSA & Circus Arts are just the tip of the Chicago circus spring thawing iceberg. I had the pleasure to interview one of Moment’s founders, Courtney Prokopas about how Moment is organized and how to get involved.

How did the concept for Moment emerge?

It’s something that is a bit of an artist’s response to a number of setbacks (and I’m using air quotes there) to the circus community in the US right now. The closing of Ringling Bros., the bankruptcy of the Big Apple Circus, and Chicago Contemporary Circus Festival deciding to close up shop for example. The American circus community is feeling a bit lost. I’m someone who is aggressively positive. So when faced with a number of setbacks, I think let’s just come together and make. Let’s try as a group collectively to make a space for ourselves to create rather than wait for someone to offer us a place to perform or a company to work for. That’s where the idea of a catalyst comes from. Moment circus is about catalyst and celebration. It’s not necessarily about presenting polished, finished or perfect work. But rather it’s about doing and trying.

By your description, the answer to this question might be apparent, but even so, how is it different from CCCF (Chicago Contemporary Circus Festival)?

It’s entirely different, although I do think that they could co-exist. This is in no way connected to CCCF. But of course, the circus community is small so everyone is co-mingling, exchanging ideas, chipping in and helping out. The wonderful thing about CCCF is that it was big, it had a big stage, with beautiful and elaborate works and with that comes beautiful, elaborate budgets. So, Moment is really more about creation and less about observation. Of course, there are performance and public components. But its more about a community of people coming together to keep making, doing and exchanging. It’s just a way of starting a conversation. CCCF had that component, but this is on such a smaller scale.

From what I’m gathering, it seems like it is part experiential, part residency, part workshop and part performance based.

Yeah, and I am organizing it, but my secret dream is that other people use this model in other locations and programs. So maybe Moment Sante Fe will pop up in three years. I’m an organizer but I’m not a director. I’m the one sending emails. I want to tap in to what people want to make and facilitate it. I don’t want to direct.

Do you want this to be an annual thing in Chicago?

I’m open to the idea if there is an urgency or a desire for it. The entire event is modeled on being responsive and malleable. Shayna Swanson of Aloft came to me and said she had an idea for a project and I said that sounds perfect. It’s the 48 Hour Project, which is gathering 24 artists for a short amount of time for an intensive creation process. There are a number of creative disciplines that use that idea; the 48-hour Film Project, the 48 Hour Dance Project. It’s about that creative boundary of time. But we haven’t seen one for circus.

So, the 48 Hour Circus Project is about gathering people that are genuinely invested and involved in working collaboratively, and experimentally for that period of time and creating a show–the goal is not to create a show that can then go on tour. It’s not an incubator. There are a number of them popping up in the circus community which are very much needed. But these 24 people may not be in the same room at the same time ever again. It’s happening once and it can be a magical jump start for people. It can be that catalyst to maybe work with other people and a quick growth that can then lead to years of inquiry.

What are the other shows that are happening?

The 48 Hour Project is the kick-off that sets the tone for the festival by explaining that this is a moment this is happening once and may never happen again because we’re living in the moment and being present. There are a series of intensives. Roy Gomez Cruz and I talked a lot about the language of the festival and landed on the term ‘intensives’ rather than master classes because master classes imply that there is a hierarchy of power and knowledge. Intensive is not that. It’s not about one person coming and saying “This is how you do it” and the students saying “Now I’ve learned from the master”. It’s about being open to dialog, exchange and inquiry.

There are four individuals that I invited who are very involved in different ways of working collaboratively, experimentally, inter-disciplinary and cross-culturally. There is Terry Crane from Acrobatic Conundrum—he is the US circus person who is known to work collaboratively. We have Emma Sergeant, from Australia. Her method of working is about interdisciplinary exchange, and working with the Australian model of acrobatics, which is all about listening and collaborating non-verbally with weight sharing and intuitive movement. There is Emiliano Ron who has spent the past two years just leading rope workshops around the world. Every week he is in another country’s creating a following of aerial acrobats and he can speak to circus anywhere. We have Guillermo Leon who is from Mexico and who studied in Brussels. He has spent the past two years working in various social circuses across the world. He’s done a residencies in Syria, Turkey, South Africa. He’s also been all over Europe and Central and South America. While he is an amazing performer and will be an amazing resource for the festival, it’s not about bring the best juggler or the best hand balancer because those are arbitrary distinctions. It’s more about who is going to engage in conversation and be the rhizomes and be the roots.

Who is Moment for? How does it connect with the larger community in Chicago and with artists?

That’s a really good question. It’s for a number of different people. It’s a festival that is being produced by a company called Moment Collective, which in turn is comprised of people from all over the spectrum of performance. We have folks that are comedians, storytellers, musicians, beat boxers, DJs, and dancers. We’ve been doing pre-shows. Bringing in musicians, being open to artists. People have approached me and I say yes, absolutely I can use a beatboxer. Everyone can use a beatboxer. Just really being responsive and drawing connections. It is basically a bunch of amazing, creative souls that I know who have been collaborating on different levels– but we finally gave it a name.

Moment the festival has an artist branch for circus artists and physical performers to create and then there are public performances happening. We have a strong partnership going with Jahn School of Fine Arts. This is a Chicago Public school whose family and friends formed a very strong nonprofit called Friends of Jahn. They petitioned Chicago public schools to redefine the curriculum from a world language academy to a fine arts curriculum, which is unheard of. Moment Collective is providing workshops and performances in the school and then our biggest event is a remount of El Circo Cheapo cabaret which is being hosted at Jahn. There is a 6pm and 9pm show and we are reserving a big portion of the tickets to be distributed to underserved families.

How and why should people participate in Moment?

It’s all about trying and feeding one’s curiosity. My answer to why is ‘Why not?’ The events will be in a collaborative and celebratory spirit. It’s all about celebrating what humans can do and how they can express themselves and harnessing the power of their bodies and how they can tap in to people’s emotions.

There are different participation levels: For example, there are the shows, which the public can buy tickets for, and there is an event on Sunday called the Luchadores Rope battle which is aerial acrobatics open to all ages. In addition to that there is a pop up local artisan’s market happening on Sunday.

There are workshops happening as well. A lot of this event is about exchange and barter so for the individuals who are leading the workshops their compensation is that they are allowed to participate in the other workshops. This way everyone who is involved is not only leading but also learning.

The workshops are on Friday and Saturday afternoon (open to all ages, although 16 & up might be more suitable) and it is $40 for the afternoon and you can take up to 4 workshops. It’s like a  pass, designed to get you to take a risk and try something you haven’t tried before. Sort of like, I know you like the potatoes but you know, try the Brussel sprouts. 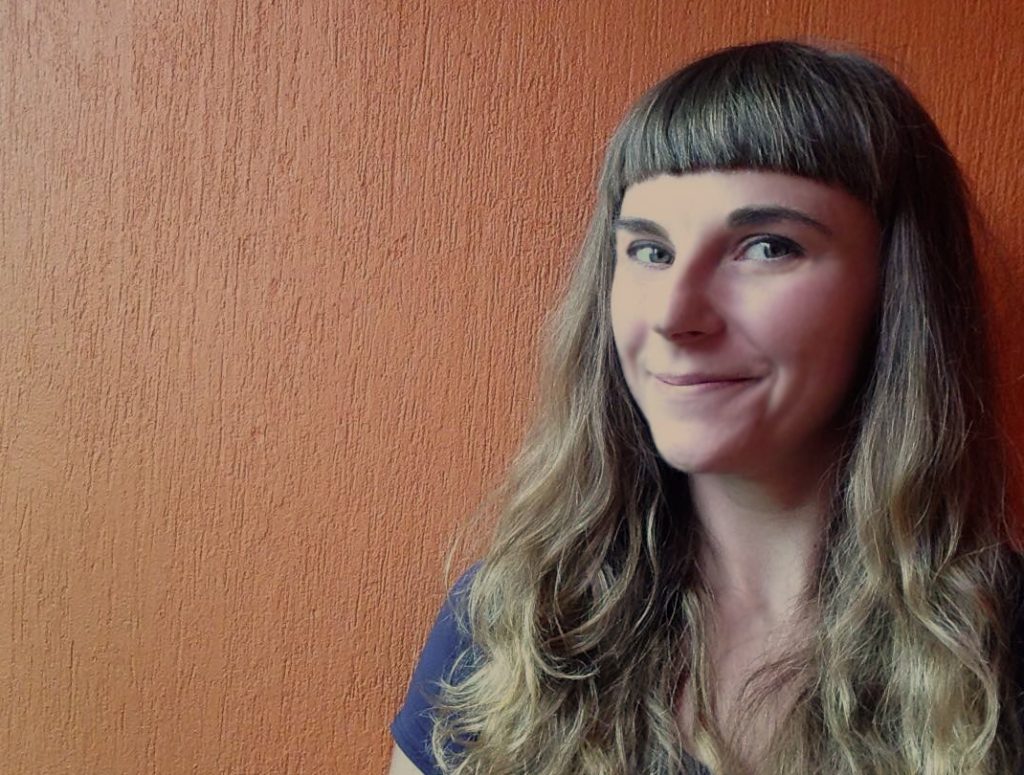 Courtney Prokopas (Massachusetts, U.S.A.) is a classically trained dancer turned circus artist. She is the co-founder of Moment Collective and director of Moment Circus Celebration & Catalyst. She is presently based in Chicago where she teaches circus to all ages through CircEsteem and Aloft.

Performing highlights include the international debut of her cord and bulb act at Circonvencion Mexicana 2015. In 2016 she held a residency at Cirko de Mente in Mexico City to create her solo show Cuerpo Eléctrico, which she also performed during International Festival de Circo Linares 2016.

Her work is strongly inspired by the power of dialogue and exchange. She is a lifelong learner, with participation in the 5th International Meeting of Wire Walkers in Ardèche, France, Gaga Intensive in Turino, Italy, and upcoming participation in the 1st Convention of Wire in Cali, Columbia.

She and her creative partner David Orozco will be touring their show Prokoplantae (created with support from Cracovia 32 in Mexico City) in the coming year. She also has an upcoming residency with Zip Zap Circus in Cape Town, South Africa.

She holds a B.A. in Visual Arts from the University of Chicago and an M.F.A. in Moving Image from University of Illinois at Chicago.