In December of 2015 my whole family sloughed off the holidays in exchange for a 3 week visit to Australia. We went to visit my daughter who was coming to the end of her one year study at National Institute of Circus Arts (NICA) in Melbourne, but while we were there we decided to tour around and see as much as possible.  As with any travel that we’re involved in, we also decided to see as much circus related stuff as possible. But we didn’t really time things correctly for that, as all of Australia was on its lengthy summer/Christmas holidays. We made the most of it, seeing who and what we could and filling in the gaps with Australian brunch (avocados and mangos are so huge there! Bananas taste 75% more bananayie! Eggs are so golden!) and trips to the visually stunning parts of the country to sooth our circus deprived souls.

Just in Footscray, right where we happened to be staying, was a very established circus school for women and their communities. Women’s Circus offers year round circus training for all levels of ability. We popped in to say hello the day before their showcase and were invited back to see the performance the next day. I’m glad we went, as we got to see the space as it was meant to be, full of community rooting for their performing friends and family. People sat on the floor and on mats, fanning themselves and shouting their encouragement after every act. Although the skill level was recreational, the art level was fabulous and daring. One performer did a silks act while also doing spoken word poetry about her mother, who had been a courtesan. In another memorable act, a small group of 4 or 5 women of all ages and sizes played with the concept of space using physical theater by occupying a small room and recreating the rat race in it, making themselves the maze runners and using only their infrequent interactions as a buoy in the mayhem. Afterwards there was a big potluck and lots of socializing.

We met the gracious Emma Sergeant (of Casus and most recently ESP) at the cafe around the corner from NICA and she took us on a quick tour of the circus school she graduated from years before. She would soon be directing there in between her many engagements.  The empty school had high ceilings, massive rigging everywhere and a skeleton crew of staff. I had envisioned it full of action many times, and fortunately my daughter had posted some videos of herself and friends working on acts.

After NICA, we hopped in Emma’s car full of circus props and drove across town to Collingswood, home of Circus Oz, Melbourne’s oldest circus treasure. We took a nice look at their Melba Spiegel tent, a semi-permanent wooden structure in the shape of a circus tent. They host smaller shows, residencies and private events in there. Then we entered the big building and had a look around.  We met up with senior artistic associate Antonella Casella who was a founder of Brisbane’s Vulcana Women’s Circus and who told us many interesting historical things about the early days of that, Rock-n-Roll Circus (which eventually became Circa) and Circus Oz. She and Emma explained how Australia’s circus institutions like these had always had a social justice element that came through from their origins to this day.

The building is new for them, but they wasted no time making it their home. The costume department was overflowing, the music room had interesting Aboriginal words written on the white boards and the creation labs were full of schemes. All that was missing were the actual circus artists, who Antonella told us we had missed by one day, as they went up to Sydney to perform their Christmas shows. We were headed up to Sydney the next day, but our schedule required surfing on Christmas day 10 hours north of Sydney, so we did not have enough time to stop and see the show.

After the tour, I paused to admire the giant Keith Harring mural that graced the wall heading in to their lot. He painted it in 1984. Emma said the building, a technical school, was almost demolished before Circus Oz decided to move in next store. The mural is now thankfully being persevered and the building is earmarked to become a creative arts center. 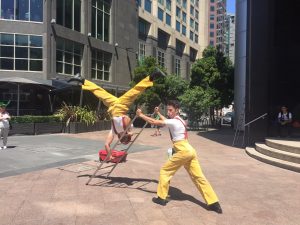 On a hike through downtown one day we happened upon a duo of brothers who have pretended to be firemen all around the world while doing great street circus. The Circus Firemen have their shtick down pat. “If you don’t have anything to give, don’t worry… there’s an ATM just around the corner,” is a line we often repeat.  They were slick talkers and ladder walkers and they even gathered a small crowd of appreciative street circus performers to go with the larger crowd of pedestrians who dug around for small bills to donate to the cause. It wasn’t a wasted half hour in the glaring summer sun.

It may seem like a little thing, but to find an actual store full of juggling goods is a fairly thrilling outing for my family.  Such places are rare in the United States. Fortunately, Juggleart was full of great juggle toys and located in the very hip neighborhood of Fitzroy where we could shop for ironic postcards, eat vegetarian food prepared by Hare Krishnas and walk away with a juggling hat, and a new set of juggling balls. There was something for everyone to do, from drooling on the diabolo selection, to getting scolded for vigorously trying out the juggling hat we fully intended to buy anyway. It was a perfect afternoon! Although maybe not so perfect for my husband who hung out in the hot sun outside wishing his family had less time-consuming interests.

That was our circus tour of Australia. Many things were missing, due to our three week time constraint, our timing and the desire to actually see the country too. We didn’t get to visit Flying Fruit Circus,( a children’s circus that is renowned for creating a life long interest among its performers)which was big on my list of things to see.  I also hoped to make it to Brisbane to visit Vulcan Women’s Circus, Circa, and Flipside Circus.  Nevertheless, we got to visit a country that has thrown itself headfirst in to circus and got a good sense of what they are up to, which is producing creative, diverse, contemporary circus performers and works.